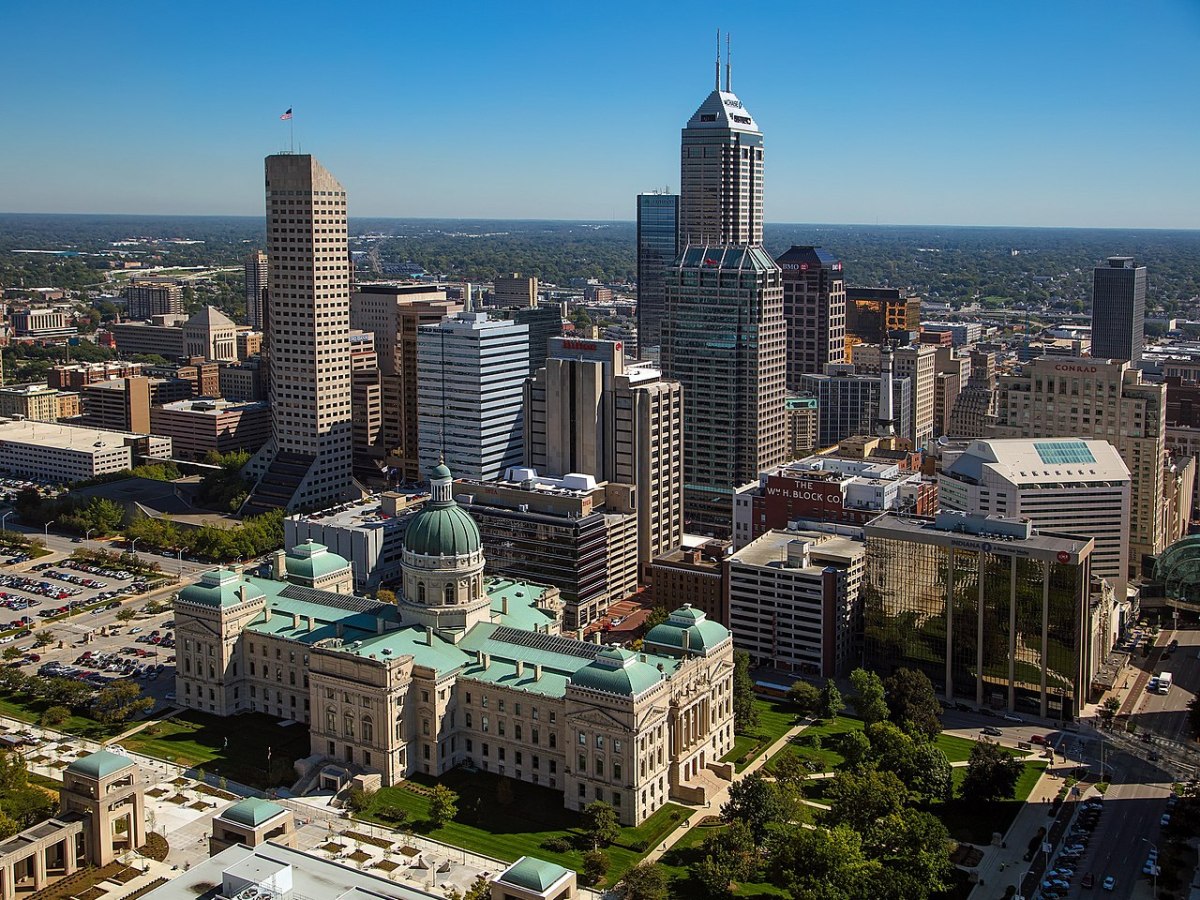 Some scientists and lawmakers are drawn to the promise of carbon-free baseload power plants, despite others saying the technology is a hazardous distraction from current options such as wind, solar, and demand response.

The recent focus of a legislative task committee on small nuclear reactors as a solution for Indiana’s energy future has raised concerns among renewable energy proponents.

The legislature established the 21st Century Energy Task Force in 2019 to provide legislative recommendations on the state’s future power system. Last year, the organization released its inaugural report. The task force was reactivated this year by legislation, with defined goals and a report expected in two years. The focus of a recent discussion was on small modular reactors, or SMRs.

SMRs have been promoted as a safe and cost-effective alternative to fossil-fuel power plants, but the first test projects aren’t anticipated to be operational until the end of the decade, and opponents perceive several risks, including the need to store spent radioactive material permanently. They claim that focusing on a potential but untested technology diverts attention away from current solutions that are ready to use right now.

“Not only is all this R&D money going into SMRs harming renewables, but it also provides them an excuse not to make the investments they should be making today,” said Kerwin Olson, Executive Director of the Citizens Action Coalition. “With solar and wind and demand response, we have clean, accessible, inexpensive, off-the-shelf technologies now – that’s where our investments should be today.”

As coal plants close in historically coal-heavy Indiana, the argument over how to replace the power generated by those plants, as well as what to do with the sites, has heated up.

In September, the firm Indiana Michigan Power (I&M) struck an agreement with environmental and citizen groups, as well as towns, to retire its Rockport coal plant in Indiana by 2028 and convert it to a merchant generator by 2024, rather than recovering costs from consumers.

After the Rockport coal plant closes, it’s unclear what will happen to the property, although some sort of generating is probable. At the task force’s Oct. 12 meeting, I&M Power’s parent company’s chief nuclear officer highlighted the possibilities for SMRs like those being developed by NuScale in Portland, Oregon.

See also  EMEC has been named the Champion of Renewable Energy

“The NuScale design is extremely well along and ready to be built someplace,” said Joel Gebbie, senior vice president and chief nuclear officer of I&M’s parent company, American Electric Power, adding that other firms are working on SMRs as well.

Increased distributed energy resources, such as solar, “seriously complicates” the task of utilities supplying their consumers, according to Gebbie. The modular reactors, according to him and NuScale executives, are a means to provide dependability and baseload electricity at the same time that additional renewables are being constructed.

“You may have some providing the grid and some not supplying the grid if you have a four pack, eight pack, or twelve pack [of SMRs],” Gebbie explained. “They suit extremely well for that future where varied energy resources are necessary.”

SMRs were touted as a good alternative for old coal plant sites by NuScale executives during their presentation to the task team. They said that coal plant workers might be rehired for identical jobs in an SMR facility, preserving the area’s tax base in the process.

“When it comes to closing coal plants, it’s a wonderful answer for the twenty-first century,” Suzanne Jaworowski, an energy consultant with NuScale, told the task group.

The 77-megawatt SMR units from NuScale will be able to be connected to form a power plant with a capacity of nearly a gigawatt on 30 acres, according to the company. In a report to the task force, the business detailed how it is collaborating with a local public power consortium to develop a facility on the site of a former coal plant in Idaho.

Small nuclear reactors will create energy by producing steam, which will spin a turbine, similar to how coal plants work. NuScale sales director Dom Claudio told the task group that the steam could be used to produce hydrogen for fuel cells, desalination, and the extraction of natural gas and oil.

See also  Despite Putin's promise to help, Russia has decided not to increase natural gas supply to Europe

Claudio walked over detailed drawings for a prospective SMR facility in Indiana, pointing out that the “compact footprint” would fit nicely on an existing coal plant site. A tiny modular reactor, Claudio said, “integrates extremely well with renewable resources, notably wind and sun.” It has a responsiveness to it that will smooth out the variations in renewable generation. “By employing this, you can really enhance the amount of wind and sun that you utilize.”

Claudio estimates that an SMR facility would produce 270 full-time employment over the course of its 60-year lifespan, as well as 1,200 construction jobs over the course of three years. Retraining personnel is simple, he claims, because operating the reactors is akin to managing a coal plant. Claudio responded to senators’ queries by saying that spent fuel from SMRs must be kept in the same way that nuclear waste from bigger reactors is; the US has yet to come up with a long-term strategy for such waste storage.

Olson estimated that it would take years for SMRs to be developed in Indiana, adding that the Idaho pilot project isn’t expected to be completed until 2029. SMRs were also proposed for the State Line coal plant in Northwest Indiana, which closed in 2012 and located directly across the border from Chicago, a few years ago. On that site, a data center was eventually constructed.

From coal to gas

While politicians and utilities may be contemplating SMRs in the future, natural gas plants have lately been favored by utilities.

According to recent testimony and filings with the state regulatory commission, a two-year-old 671-megawatt combined cycle gas turbine plant called Eagle Valley has been offline since April due to technical issues, and ratepayers have been billed for over $1 million spent on replacement power purchased on the market.

See also  While other energy firms go bust, this minnow just turned a profit: ‘I sleep well at night’

Olson, whose group was a vocal opponent of the plant’s construction, says the plant’s brief closure exemplifies why it was an ill-advised use of ratepayer dollars.

“We generally opposed it, noting prospects for wind and solar and greater efficiency,” Olson explained. “The statehouse debate was all about dependability and baseload; it was the first new baseload plant built in a long time, and it didn’t operate the full summer.” As a result, the argument of dependability isn’t particularly persuasive.”

During his testimony, John Bigalbal, the chief operating officer of the firm that serves plant owner Indianapolis Electricity & Light, stated that the gas plant produced steady “low cost” baseload power for the first two years it was operational. According to Bigalbal, the facility would be shut down until November. The issues were triggered by a disconnected cable that prevented the plant from synchronizing with the grid, resulting in additional issues that cost $3.6 million to fix.

The Citizens Action Coalition also opposes plans to build additional gas peaker facilities on the site of CenterPoint Energy’s A.B. Brown coal plant, which is set to close in 2023. The plants would only operate about 5% of the time to satisfy peak demand, according to the company’s papers, and may cost ordinary ratepayers an extra $23 per month. Energy efficiency and demand response, according to the consortium, might better meet or minimize such peak demand.

The Federal Energy Regulatory Commission ruled on Oct. 7 that an environmental impact statement be completed for the planned gas pipeline, which would serve the gas plant and was built by a Texas business.

The pipeline requires FERC permission, and FERC will decide whether the project is in the “public convenience and necessity” based in part on the research. The pipeline’s influence on wetlands, streams, greenhouse gas emissions, and air quality would most likely be examined in the research. Public opinions on what the environmental impact research should look into are being taken through November 8th.

According to a power company executive, Asia's shift to renewable energy may be accelerated

The G7 countries "could decarbonize power by 2035."