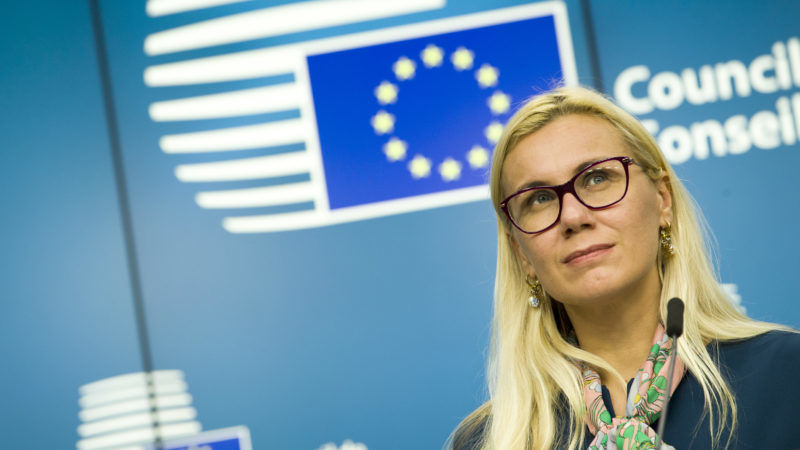 Brussels has indicated that it is prepared to look into the development of an EU-wide strategic reserve for natural gas, which would provide steady and predictable supply for the whole bloc while preventing large price swings like the ones that are now driving up power costs.

A small number of EU nations, notably France and Spain, have previously proposed a strategic gas reserve as a possible solution to the continuing energy crisis.

The European Commission has now backed the proposal, which may be modeled after the cooperative procurement of anti-coronavirus vaccinations for all EU countries that Brussels organized.

Despite the fact that gas accounts for more than a quarter of the EU’s total energy consumption, barely half of the member states have storage facilities. A more “integrated European strategy,” according to the Commission, may save costs and mitigate the effects of price volatility. The cooperative system would be voluntary and compliant with EU competition regulations.

However, the Commission stressed that such a proposal would not bring immediate respite from the current crisis and, if implemented, would only serve to alleviate the next energy crisis.

Meanwhile, Brussels recommends that EU nations implement short-term measures to combat rising power costs, such as income support for low-income people, subsidies for struggling businesses, and tax reductions. All of these solutions, according to the Commission, must be transitory, customized, and targeted, taking into account each country’s social and economic characteristics.

So far, 20 member states have indicated that they want to employ these instruments to help their citizens and businesses. However, while energy prices remain alarmingly high, certain capitals are becoming increasingly outspoken about the necessity for far-reaching and extraordinary measures to rein in the market, a route that the Commission, for the time being, refuses to tread.

The current crisis is being caused by basic supply and demand dynamics: the economic recovery has increased Europe’s and Asia’s electricity needs, but the main energy suppliers, such as Russia, have been unable – or unwilling – to meet this rising demand, resulting in a significant and very sudden increase in prices all over the world.

The last production facility required to fulfill total demand determines the wholesale price of energy in Europe. Because gas-fired power plants are typically used at peak hours, the price of natural gas has a direct influence on the entire price of electricity, even if renewable energy sources are included in the process.

Several member nations, most notably France, which depends significantly on nuclear reactors, have criticized this “coupling” of gas and power costs. Paris is pushing for a “decoupling” as soon as possible, but the Commission feels that this marginal pricing technique is the “most efficient for liberalized energy markets” and the “best adapted” for encouraging cross-border trade.

France’s feeling of urgency and enthusiasm for substantial reform is not shared by all member nations. The energy mix, like the weight of the crisis, varies considerably across the bloc.

In a paper released on Wednesday afternoon, the Commission took a cautious approach, choosing to err on the side of caution to avoid distorting the fragile market with overbearing government involvement.

Brussels advises EU member states to utilize proceeds from the Emissions Trading Mechanism (ETS) — an EU-wide system for pricing CO2 emissions – to fund income support for low-income households, such as vouchers or partial pill payments. The ETS has made almost €26 billion in income in the last year through the sale of carbon permits that polluting firms must buy and can exchange among themselves.

Due to rising gas prices, several governments have been obliged to rely on coal-fired power plants, which produce more carbon dioxide and so require more ETS permits to offset. This has led ETS costs to quadruple in less than a year, accounting for more than a fifth of the energy shortage, according to the Commission.

“The effect of a rise in gas prices on electricity prices is nine times greater than the effect of an increase in carbon prices,” the paper states.

Several countries have expressed concern about market speculation in the Emissions Trading System, but the executive branch has found no evidence to back up these accusations. It does, however, promise to increase monitoring in the ETS and throughout the energy sector in general to combat anti-competitive behavior. A group of MEPs has requested the European Commission to look into Gazprom, Russia’s largest gas supplier, for its suspected participation in the price hikes.

Additional steps that national governments may take include legislative safeguards to ensure that low-income families do not lose power, as well as state help – mostly subsidies – for businesses that are struggling to pay their bills and want to increase their renewable energy intake.

According to the executive, tax cuts can also safeguard consumers. Taxes and levies account for 41% of household energy bills on average, providing member states substantial leeway to give a temporary reduction or even a complete exemption to the most vulnerable households. Countries can even reduce VAT rates to as low as 0.5 percent, which is the bare minimum allowed by EU legislation.

The Commission’s suggestions, according to Dimitri Vergne, a sustainability policy officer at the European Consumer Organisation (BEUC), are “extremely robust, consumer-centric,” and may result in concrete advantages for people.

“I would argue the ball is now in the field of national governments,” Vergne told Euronews.

“It is up to national governments to execute this set of actions and truly transform these beautiful proposals into practical consumer protection – some have already started doing so.”

Critical voices blaming the energy crisis on the European Green Deal have been rebuffed by the Commission, which has instead reaffirmed its commitment to climate neutrality, claiming that the current scenario demonstrates the bloc’s reliance on costly and polluting fossil fuels.

“The current scenario is unusual, and the internal energy market has served us well for the previous 20 years,” European Commissioner for Energy Kadri Simson stated.

“However, we must ensure that it does so in the future, delivering on the European Green Deal, increasing our energy independence, and achieving our climate targets.”

Simson encouraged governments to speed up renewable energy auctions and make new facility building simpler, as well as making it easy for individuals to install their own green technologies at home, such as solar roofs. She also urged nations to take “appropriate lessons” from the situation.

Member states have set aside more than €177 billion for climate action projects as part of the EU’s recovery fund, including the restoration of public and private buildings, which account for 40% of total energy consumption and 36% of greenhouse gas emissions.

However, because the main advantages of the green transition will take years to manifest, natural gas is in a unique position to act as a transitional energy source. The Commission is already working on numerous measures to decarbonize the gas industry and ensure supply security and stability, including a notional shared reserve.

In addition, the Commission will cooperate with member states to strengthen energy system resilience and safeguard them from cyber attacks and harsh weather. During the summer, lower-than-expected wind speeds prompted countries to utilize more natural gas, depleting winter stockpiles. (Currently, EU gas storage levels are little higher than 75%, compared to an average of 90% over the last decade.)

In addition, the EU intends to create a €72.2 billion Social Climate Fund to tackle energy poverty, but this plan is reliant on the development of a new, stand-alone Emissions Trading System that will price the fuels used to heat buildings and power transportation, including gas.

The concept has been heavily criticized, with numerous MEPs and specialists saying that regular citizens would be forced to foot the price in the end. The energy crisis is set to embolden detractors, despite the Commission’s insistence that all carbon should be priced, regardless of its source or purpose.

Next week, European leaders will meet in Brussels for a two-day summit to consider all of these measures. Electricity costs aren’t usually a topic of discussion at such high-level gatherings, but the seriousness of the issue has pushed the argument to the forefront of the political agenda.

The problem shows no indications of abating: according to the Commission, natural gas prices will stay high throughout the winter, when energy demand is projected to climb as temperatures drop, until stabilizing in April.